Preferred Reading Environment: Kicked back on the couch on your day off.

Reading Accoutrements: In your robe and bunny slippers while keeping it classy with a glass of wine. 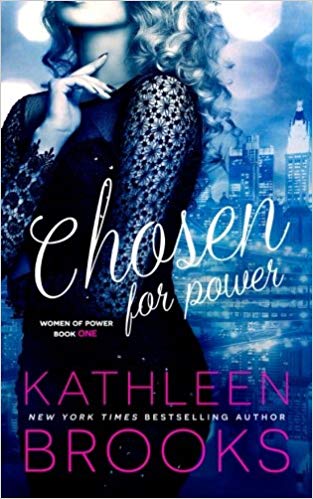 I read Chosen for Power because Kathleen Brooks’s writing draws me in. When I’m out of books to read, I search authors of books I’ve read and enjoyed to see if they’ve released anything else. This is the first book in one of my favorite girl-power, guilty-pleasure series.

The book begins with the Simpson family standing in the principal’s office of a prestigious private school in Atlanta while the headmaster tells them that there is no room for them at the school. Elle, the oldest daughter and second oldest child, tells her mother that they should just accept the offer from the other private school in town. Before their mother can out the lie, Reid, the eldest, jumps on the bandwagon, adding that a full ride in exchange for participating in their knowledge bowl is a good offer, after all. And suddenly, they are invited to attend a prestigious private school.

Fast forward many years later, Elle is CEO of Simpson Global – a massive, successful, family-run corporation with diversified interests. Her older brother, Reid, is Vice President of their hotels and casinos division; Her little sister, Brianna, is Vice President of the steel and construction division; and her youngest sister, Allegra, is Vice President of their fashion houses; while Elle manages the finances and oversees negotiations. They are a successful family, but success in business comes with its own set of challenges. Elle struggles to find a man she can trust with her heart, especially after her former fiancé engineered a corporate takeover attempt with the help of her competition.

Elle wants a family, but she is afraid to have her heart broken again. She decides to start looking for a new relationship at a charity masquerade ball – people who can afford a $25,000 plate of food aren’t likely to go after her money, and they won’t know who she is while she wears a mask! That’s where she meets Damien, the reclusive CEO of a tech company who dropped out of the spotlight when the press became too invasive for him. They are both incredibly busy running their own companies, but enjoy the time they spend together at the end of their days. When Damien learns that Elle has been keeping things from him, the two must overcome their day-to-day stress to ensure that the time they spend together is quality time.

Meanwhile, because this is a romantic suspense novel, Elle is holding off a takeover attempt that threatens to ruin not only her business, but her life.

Chosen for Power intrigued me because of the obvious strength of both of the main characters. Often, when I read romance books with a character who is a CEO, they tend to end up with someone…well, like me. When I say that, I mean that they’re neck deep in student loan debt and working as a barista while trying to find a job that will use their degree. Don’t get me wrong, there is nothing wrong with that plot line, but I was intrigued by the equality of these two. They have similar life experiences and stressors to bond over, and neither is superior to the other when it comes to money or success.

I also thought the way the internal conflict of this story was handled was interesting. Elle fought off the first takeover attempt by herself and she has been running the company the same way ever since – she never asks for help. When she feels physically threatened, Elle takes self-defense lessons. When she is told she’s going to lose her company, she does her research, formulates a plan, and stops the takeover in its tracks. When a family member decides they need to make an investment in something new, she reads the reports, handles the negotiations, and arranges the financing. She handles this new takeover plot no differently – she makes the plans and executes them with precision, all while running her corporation and doing it with style and class. But she doesn’t tell Damien what’s going on.

Damien is taken to task by an old family friend of the Simpsons, Shirley. The age-undetermined old lady comes into Damien’s office and tells him, in no uncertain terms, that he is letting Elle down. How could he see Elle so exhausted and not offer to help? Did he not care about her? I got a little…okay, a lot…mad at that. Relationships take work, and it’s not just the responsibility of the man to be there for their partner. Damien was dealing with a complicated government contract and was, rightfully, distracted. Elle never once said a word to him about what was going on. If anyone was at fault, it was Elle for choosing to keep her struggle from him, yet Damien is the one taken to task. (I will say that Damien handles it really adorably and I totally sighed at the sentimentality no less than three times.)

I’ve noticed a trend in Kathleen Brooks’s writing: she always includes a little old lady with perfect southern society manners and the dirtiest mind you’ve ever heard. In the Women of Power series, it’s Shirley, who walks around with banners strung along her walker that say things like, “Blink if you think I’m sexy,” and, “I like my men the way I like my pictures…well hung.”  In the Keeneston, Kentucky, series, there are four little old ladies who fit the bill. These old ladies are huge gossips, sticklers for manners, and tend to outwardly decry the act of sex before marriage in the younger generations while also nudging them toward romantic, sexual relationships. It really highlights the double-standard that young people looking for relationships have to deal with nowadays, without choosing a side.

Overall, the storyline kept me engaged. There was enough romance to satisfy my sigh-quota and enough action and suspense to leave me feeling like I got my money’s worth. Elle and Damien are too cute for words, and the Simpson family in general is kickass. Which reminds me, Chosen for Power is the first of four books in the Women of Power series and it is a series I truly recommend. It’ll take you from the corporate tower to the construction zone and into the warehouse district for a fashion show or two before you make your foray into intrigue and the wonderful world of resorts, following powerful women who know what they want and aren’t afraid to reach for it.

What’s your favorite girl power book or series? Let us know in the comments!