Book: The Selection by Kiera Cass

Preferred Reading Environment: In a place where you can let your imagination run wild!

Reading Accoutrements: Try something new! America – the main character in this series – has to try all kinds of new things and I think it helps to relate if you are also trying something new…although, it might just be that I’m hungry and watching Chopped.

Content Notes: There is a very prevalent caste system, some serious child abuse, and some violence related to revolution in this series – not all of which takes place in this book. 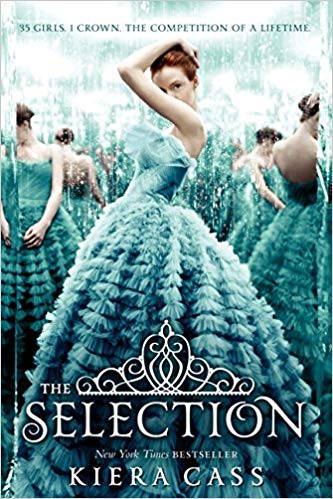 I first noticed The Selection, by Kiera Cass, at the Barnes & Noble in the Mayo Clinic when my sister was admitted there for a few days while I was in graduate school. I am a sucker for a YA dystopian story with a strong female lead and this one seemed right up my ally – there was romance, intrigue, and even a prince. The Selection is not a stand alone novel and that is pretty clear from the description of the book. So, I bought the series.

The dystopian world of The Selection is a society based on caste system – each class of people is designated a range of employment opportunities from nobles (Ones) to unemployables (Eights). Led by a royal family, this society relies heavily on the caste structure to maintain its economy. Every time the first child of the King and Queen comes of age, a process called “The Selection” takes place – essentially, a competition for the prince or princess’s hand.

When it is announced that Prince Maxon will be holding a Selection, America – the main character and a member of the artist class (Fives) – is unimpressed. She doesn’t mind her status as a Five because she enjoys performing. She is in love with Aspen, a boy in the servant class (Sixes) who has chosen to become a palace guard in order to gain a higher status, but he breaks up with America because he doesn’t feel he can provide for her. It’s her mother who makes America fill out the application to enter, which she does only because it’s highly unlikely that she’d be selected to participate.

The Selection is an interesting read because it’s unlike a lot of the typical dystopian literature. It’s The Hunger Games meets Pride and Prejudice. The audience is introduced to the caste system – and its flaws – by a main character who can see the problems within the society, but is content with her position in it. America is a musician, has taught herself to love performing for public audiences, and would probably choose to continue playing even if the caste system didn’t exist. While she is in love with someone outside of her caste, she doesn’t mind the changes that would come should she marry him.

But America does see the flaws in her society. Eights, comprised of mostly orphans, drug addicts, and unemployable individuals, are basically left out of the society – not allowed in many establishments, they are outcasts with no place except to be called “Eights.” Meanwhile, Ones and Twos live the high life, eating decadent food and living in enormous houses with servants to do their cooking, cleaning, and other chores. She knows that a more equitable division of resources would do her society good, but she doesn’t think there is much chance of societal change.

Maxon is a guy with a lot of secrets and he’s not great at sharing. It makes it hard to connect with him until a little later in the series. Meanwhile, Aspen is that irritating character who is stuck within the system because he doesn’t think outside-the-box. The only reason he and America aren’t together is because he was uncomfortable with the thought that she would have to provide for him. Society told him he needed to be the breadwinner so he followed society’s rules without real thought for the consequences. I really think that America doesn’t want to marry up in the caste system because, subconsciously, she thinks more highly of those who have to struggle to survive. Ones and Twos who are born into privilege have no idea what it means to work for their lives and the lives of their loved ones (or so she believes), so she doesn’t think as highly of them and their lifestyles as she does of those in the lower castes.

If you like YA dystopian romance – think Divergent (the book series, not the movies) – then consider The Selection Series. It’s a fast read that will make you think without getting fixated on the negative.

What’s your favorite dystopian book? Do you like romance in your dystopian literature? Let us know in the comments!